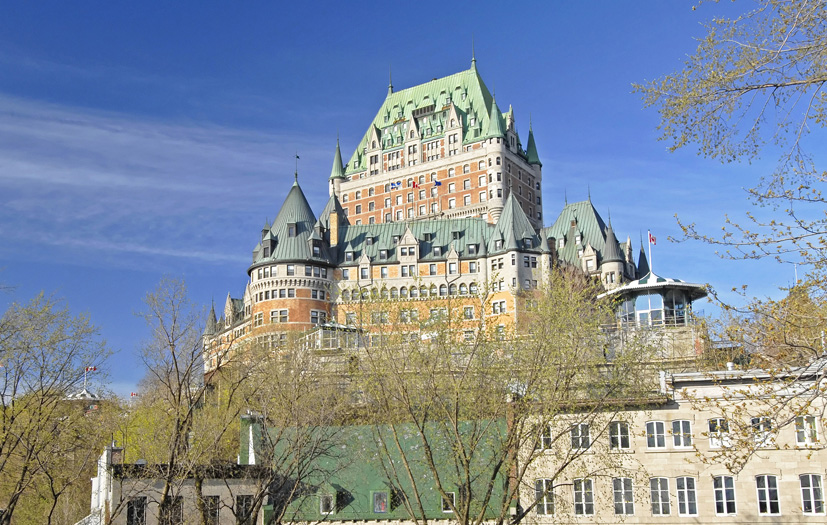 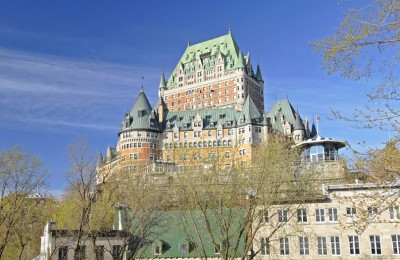 Welcome to join a 3-day unique itinerary – where exciting cities and breathtaking scenery await you on this Eastern Canada Tour. You will spend 1 night in Montreal and 1 night in Quebec City. On your sightseeing tour in each city, you will see the must-see sights, such as Parliament Hill, Peace Tower, and Centennial Flame in Ottawa; the St. Joseph Oratory and Bio Dome in Montreal. Also, enjoy time to explore Quebec City, Canada’s only walled city and a UNESCO World Heritage Site. But that’s not all… you will enjoy stunning scenery at Thousand Island cruise on this eastern Canada tour. From the vibrant cities to the beautiful scenery, this eastern Canada tour designed for the value-minded traveler is a wonderful vacation.

Kingston, the former Capital of our nation and it is a city with an exciting history dating back more than 300 years.

Ottawa is Canada’s capital. It has at its centre Parliament Hill, with grand Victorian architecture and museums. The park-lined Rideau Canal is filled with boats in summer and ice-skaters in winter.

Montréal is the largest city in Canada’s Québec province. A city that combines ancient European culture buildings and modern North American style skyscrapers. Montreal remains a city of great charm, vivacity, and gaiety, as well as one of unquestioned modernity.

Quebec City has a distinct old-world character and charm. It is the only remaining walled city in North America north of Mexico and was recognized as a UNESCO World Heritage site in 1985.crowned by the turrets of the most photographed hotel in the world, Le Chateau Frontenac.

The Thousand Islands are a group of more than 1,800 islands in the St. Lawrence River, straddling the border of the U.S. and Canada.It’s home to elaborate island mansions such as the German-style Boldt Castle on Heart Island, and Singer Castle on Dark Island 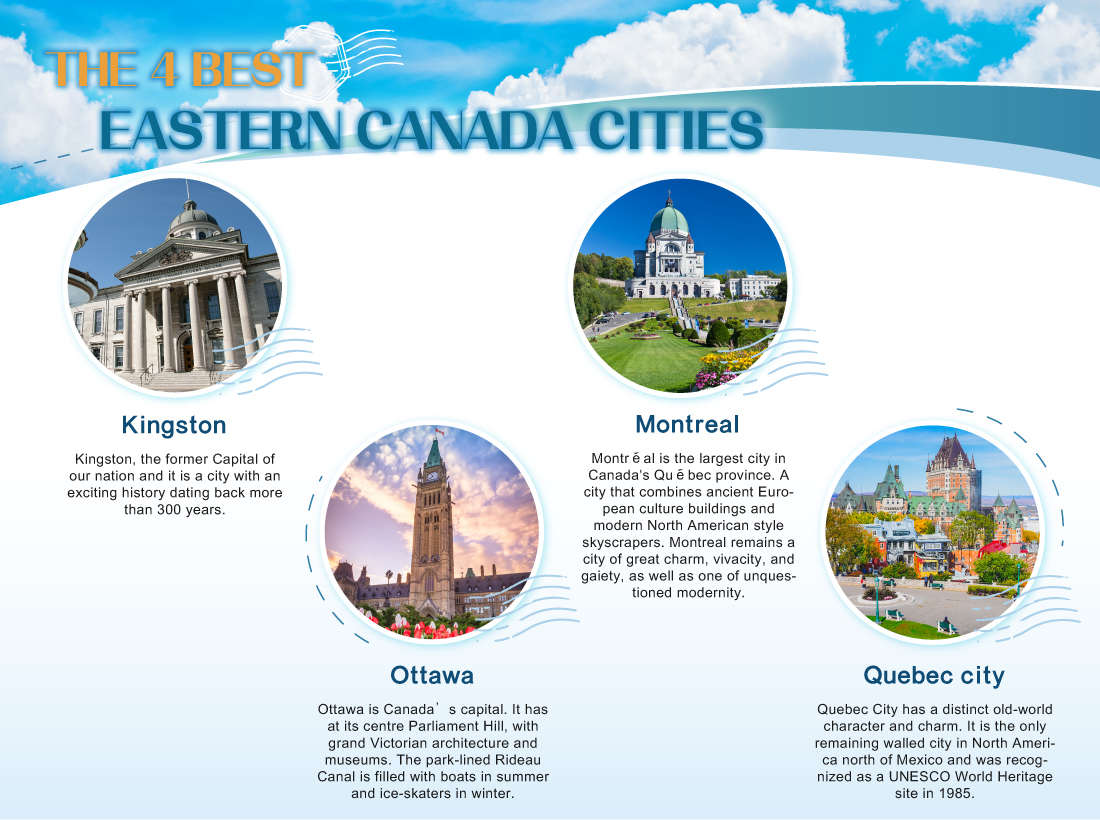 Travel eastbound in the morning along the McDonald-Cartier Freeway and arrive at the first stop in Kingston; a city with an exciting history dating back for more than 300 years. Enjoy a sightseeing tour of the City Hall, Queen’s University, and the Sir John A. McDonald House.

The evening is concluded with the arrival in one of Canada’s largest cities, Montreal. Feel free to experience nightlife in this sophisticated city after hotel check-in.

The morning starts with a guided tour of Montreal’s major attractions which include the City Hall, Court House, Cartier Bridge, Chinatown, Notre Dame Basilica ($), and the once-walled old Montreal. Take in unparalleled city views from the top of St. Joseph Oratory* ($) and explore the five ecosystems of the Americas under one roof at the Montreal Biodome* ($) located at Olympic Park.
*NOTE: All dates open to the public are subject to change and can become unavailable without notice.

The afternoon begins with a seasonal* visit to an old-world sugar shack that is reminiscent of pioneer life back in the day. A traditional lunch ($) is prepared with fresh produce picked from local farms. . After a full belly, the trip continues onward Old Quebec City. Enjoy a guided tour of Canada’s only walled city, crowned by the turrets of the most photographed hotel in the world, Le Chateau Frontenac. Until the British victory in 1759, Old Quebec was the center of New France; today, it’s a UNESCO World Heritage Site. Explore this historical city during free time at a leisurely pace, and experience the change in language and tradition.

Pierre La Port Bridge, one of the longest suspension bridges in Canada, will be taken to drive out of Quebec City in the morning. Board the scenic boat cruise ($) through the many islands of St. Lawrence Islands National Park and be amazed by the World’s shortest international bridge that connects Canada to the United States. Feel the crisp, gentle breeze as the boat navigates past summer cottages in the middle of the lake, and have the camera ready for capturing the beautiful landscape. The three-day vacation ends by returning back to Toronto in the evening.
NOTE: Thousand Islands Helicopter Tour ($) is available if weather permits.

The hotels listed are intended to be used on all departures however Safeway Tours reserves the right to substitute other hotels than those listed. If a change becomes necessary for any reason, the hotel substituted will be of equivalent quality to those listed. NO refunds are provided for hotel changes and full cancellation penalties apply. 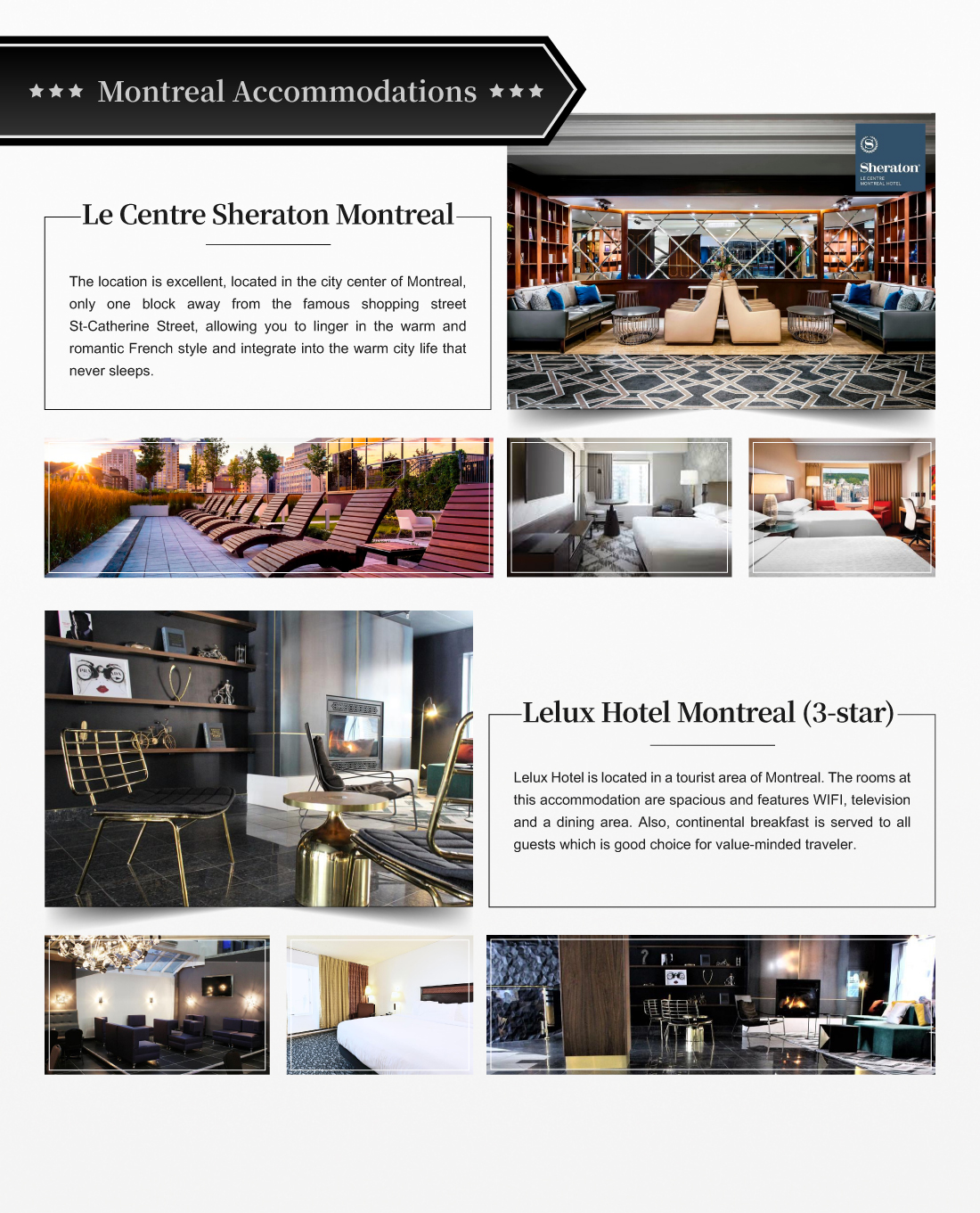 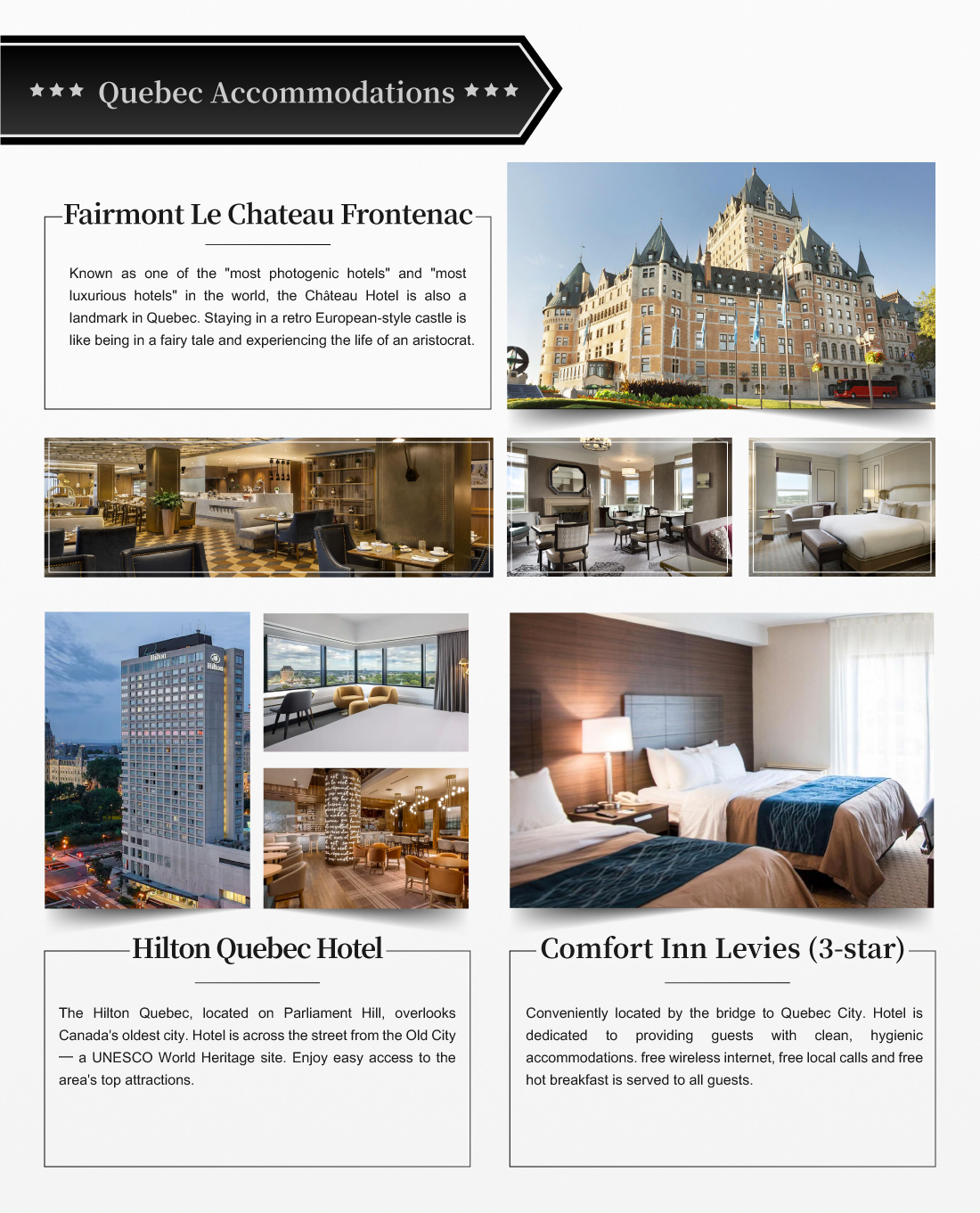 The location is excellent, located in the city center of Montreal, only one block away from the famous shopping street St-Catherine Street, allowing you to linger in the warm and romantic French style and integrate into the warm city life that never sleeps.

Lelux Hotel is located in a tourist area of Montreal. The rooms at this accommodation are spacious and features WIFI, television and a dining area. Also, continental breakfast is served to all guests which is good choice for value-minded traveler.

Known as one of the “most photogenic hotels” and “most luxurious hotels” in the world, the Château Hotel is also a landmark in Quebec. Staying in a retro European-style castle is like being in a fairy tale and experiencing the life of an aristocrat

The Hilton Québec, located on Parliament Hill, overlooks Canada’s oldest city. Hotel is across the street from the Old City – a UNESCO World Heritage site. Enjoy easy access to the area’s top attractions.

Conveniently located by the bridge to Quebec City. Hotel is dedicated to providing guests with clean, hygienic accommodations. free wireless internet, free local calls and free hot breakfast is served to all guests.

Meals are not included

With the Safeway Tours App, you've got the Fallsview Casion Shuttle at your fingertips.